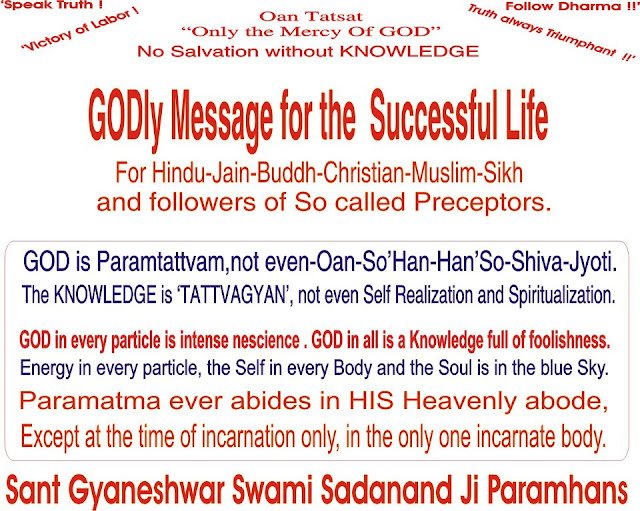 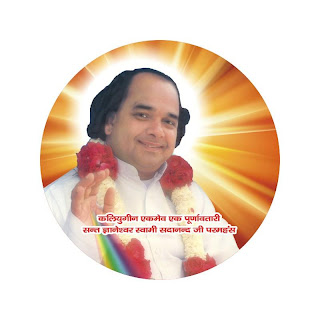 
Here in India, there is Saint who has got the Supreme System bestowed by the Supreme Almighty Lord, the Creator, the Sustainer and the Submerger of all the Universes and who is next called as Khuda-GOD-Bhagwan.
In various Scriptures, this Supreme System is also termed as Tattvagyan or Khudai Elm or Supreme Knowledge. It contains within It all the fundamental Secrets of all existences whatsoever. It is also called ' the Knowledge without remainder or the Perfect Knowledge' as nothing remains unknown and unachieved after receiving this Supreme System.
There are many an Institution in the world trying to know and see that very entity as to what is that existence which once leaves off its body and next takes up another body to start a new life in a new family (i.e. the secret of rebirth). Sometimes some children narrate their preious life but they know nothing about their "I". 'What is their "I" and what is their "I" for ? How can they see their "I" which is common in the previous and current life? Some are trying to know all such secrets by the tedious and hardest way they have been prescribed. Some don't know anything about such secrets and hence consider it (the rebith system) false. Through the very Supreme System of Khuda-GOD-Bhagwan (i.e. through Tattvagyan), it is very very very easy to know and see one's own Self which is the basic factor in rebirth in the continuous cycle of birth and death. You may also know the Hell and Heaven simultaneously. This type of practical knowledge is the first and least achievement under Tattvagyan as Tattvagyan is the System of GOD and GOD is source of all secrets.
Also there are many other Institutions in the world which are trying to know and see the Divine Entity for having been endowed with all advantages from it. In some lifes, it occasionally so happens that one suddenly sees the Divine Light encouraging for some super activity and so on so forth. People try to know and see this Divine Light by practising very tedious and hardest practices on a long term basis, yet they fail to get. However, all such secrets are very easily disclosed in one's front under Tattvagyan within seconds just under the gracious touch of the said GODly Incarnation, the Saint. Rather, one becomes able to contact the Divine Entity daily by knowing the real symptoms and practice from the Bestower of this Tattvagyan (the Saint or the GODly Incarnation) who first shows it to one practically under His Own Mercy and then makes one learn the process to see it daily.
Now, I may indicate the Ultimate Achievement under this Unique and Marvellous System of Khuda-GOD-Bhagwan.
Tattvagyan is a System neither of a Philosopher, nor of a Yogi or a Practicant, nor of anyone else, but of the Supreme Lord Himself. Hence It presents all the fundamental secrets of all existences whatsoever. Even It shows the real identity of this world (i.e. Bramha Satyam Jagan Mithya -- Only Bramha is Truth, false is the world). In a nutshel, Tattvagyan is that Projector of a Cinema Hall which shows all the play of the Universe as-it-is before the willing public sitting in the Hall of the Universe (i.e. in the world). Khuda-GOD-Bhagwan Who is the Operator of the Projector is Himself shown in one's front in toto where every conversation with Him is quite possible. IMMORTALITY (i.e. liberation from the cycle of birth and death) is spontaneously perceived by the receiver. This is the Ultimate Achievement of Tattvagyan.
Tattvagyan is, no doubt, yet unknown to the world since It is the newest System from Supreme Almighty GOD onto this world. No colleges or universities are able to tell anything about Tattvagyan since It is far over and above Education. Now we are surrendered to spread this Supreme System over the whole world for the benefit of the masses. Let nothing be unknown, unseen and unachieved --- this is our motto based on the sole Mercy of Khuda-GOD-Bhagwan. For the Service of GOD, any one may come forward to join us for this motto now.